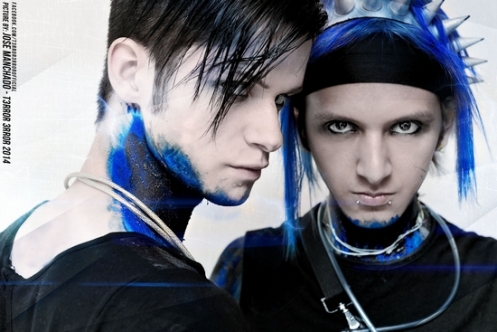 T3RR0R 3RR0R is the hard electro alien band formed by DJ 3RR0R in 2006.
Featured in countless websites and forums for its unique sound with tones of a wide variety of styles like Electro, Industrial, Hardcore, Drum and Bass, Breakbeat, Metal and more.

Influenced by big electronic artists like The Prodigy, Pendulum, Chase & Status, Hadouken in one side, and dark electro bands on the other like Grendel, Centhron, SAM, The Outside Agency, Alien Vampires among others.
The band has created danceflor filling hits like "Domination", "We Came To Party", "In My Dreams", "Lightstorm", "3D", "Human" and more wich lead it to reach the mark of over ONE MILLION plays on youtube!

The live shows have a brutal ambience of energy and madness thanks to the mix of DJ 3RR0R's vox and SCIPHYBER backings and live sampler use! A full experience of constant attacks of sounds and images take the "concerts" of T3 to a new level.

The band has raved many countries like Belgium, The Netherlands, Portugal, Spain, Venezuela, Russia, England and more, sharing stage with big names like Front 242, Covenant, Ophidian, Hocico, Apoptygma Berzerk, Nachtmahr, Suicide Commando and many more.
A new whole tour is planned for 2015, along with a new album to follow the big success of "NITRO", which includes an official videoclip for the track "We Came To Party".